Did you know that the shape or footprint of the memorial was inspired by the Congressional Medal of Honor which is highest military honor to be earned from the United States of America and is awarded for personal acts of valor above and beyond the call of duty. Because the medal is presented "in the name of Congress", it is often ... intended to represent the gratitude of the American people.  The AVM's STAR or Pentagon Platform  represents the five branches of services, equally divided. The area consists of pavers that denote the honorable military service of  all  that served during war or peacetime.  The platform flows seamlessly into the Global War on Terror Memorial Bridge; which honors 172 N.J. fallen heroes, as the  bridge connects the VALOR bar or Presidential Preamble Stage, which pays tribute to all U.S. Presidents for their civil service.

WAR DOG MEMORIAL ~ sponsored by Since World War I, tens of thousands of dogs have served in the United States Armed Forces alongside their handlers in K-9 units. Thousands of dogs have died in combat saving the lives of our military troops. FREEDOM BENCHES sponsored by Christy Burkart, Mt. Olive Kiwanis, Timothy Teen of InSitech, and Chester M. Stephan’s Elementary School  ~ The four natural blue stone are representative of President Roosevelt’s 1941 State of the Union address, also known as the Four Freedoms speech.  They include freedom of speech and expression, freedom of religion, freedom from want, and freedom from fear.  This speech was significant in that FDR went beyond the regular freedoms insured by the constitution and claimed these new rights as American values.

The ALL VETERANS MEMORIAL  is New Jersey's premiere veteran's memorial located at Turkey Brook Park in Mount Olive, New Jersey and touted for its distinctive designs and calming landscape. The unique ceremonial ground is the host to historically denoted military ceremonies and vigils.  Visitors of all ages come to learn about American history and to pay their respects to those who honorably served in the U.S. Armed Forces.

The All Veterans Memorial Park was created by volunteers and built with 100% private and in-kind donations.

SPIRITUAL CENOTAPH  ~ sponsored by Eagle Scout Eric John Daniels Wood was completed on 15 April 2017.  The Spiritual Cenotaph symbolizes religious pluralism; serving all faiths, spirituality, beliefs, and religions of all fallen warriors - known and unknown.  On 26 April 2017 more than 132 written books and scripts procured from their native origin and texts of acknowledgement of all convictions were permanently entombed as part of the monument. Army Chaplain Adam Charman, combat veteran delivered the benediction proclaiming, "Their spirits live in the hearts they left behind". On 29 May 2017 a formal dedication was held.

NORTH STAR SEATING sponsored by Home Depot, Techo-Bloc, UNILOCK New York, Meier Stone and the Uhrmann Family  ~ The North Star Seating area was dedicated to those who lost a loved one during war and the New Jersey Gold Star Mothers on May  25, 2015.  The dedication was led by U.S. Army, Deputy Chief of Staff, Lt. General Gustave F. Perna in memory and honor of their loss.  The beautifully designed 20' x 50' seating area and it's unique thought provoking figures evoke one's sense of loss, contemplation and faith; many visitors have expressed a calming effect immediately upon entering.  The North Star Seating area provides secure seating and several wheelchair spaces for veterans and their family members.

WARRIOR OBELISK ~ is a one of a kind monument that represents the four consequences of war - P.O.W., M.I.A., K.I.A., W.I.A.
P.O.W. - was sponsored by the Morris County American Legion.  Prisoner Of War is a military classification assigned to servicemen and servicewomen who had been captured, imprisoned, and tortured by the hand of the enemy combatants. The tethered hands depict the deprival of human liberty.  The monument was dedicated to all US Servicemen and Servicewomen who suffered at the hands of the enemy and to those whose minds are forever scored with the inconceivable images of atrocity.
M.I.A. - was sponsored by the 102nd Cavalry Regiment Association - Essex Troop.  Missing In Action  is a casualty classification assigned to military combatants, chaplains, and medics whose whereabouts / remains are reported missing during wartime.  The M.I.A. was dedicated on 28 May 2018 to all U.S. Servicemen and Servicewomen and Canine who never returned to their loved ones and homeland; it is our  patriotic duty to forever remember and honor their Life, Service and Sacrifice.
K.I.A. - was sponsored by the American Legion Post 91.  Killed In Action is a military classification assigned to the servicemen and servicewomen who lost their lived by the hand of the enemy and/or action of enemy combatants.  The K.I.A. monument was dedicated on 1 November 2018 -
one hundred years after the death of U.S. Army Private William J. Hocking who was killed in the Ardennes Forest in France on 1 November 1918 and in memory of all U.S. Servicemen and Servicewomen who gave their lives so that we may live free and unoppressed.

W.I.A. - was sponsored by the All Veterans Alliance.  Wounded In Action is a military classification awarded to servicemen and servicewomen who had been wounded by an instrument of war at the hand of the enemy.  To be declared wounded in action, the warrior must be rendered unable to bear arms or incapacitated to fight.  The monument was dedicated on 28 May 2018 to all U.S. Servicemen and Servicewomen who are forever scared from battle.

"FREEDOM IS NEVER MORE THAN ONE GENERATION AWAY FROM EXTINCTION. WE DIDN'T PASS IT TO OUR CHILDREN IN THE BLOODSTREAM. IT MUST BE FOUGHT FOR, PROTECTED, AND HANDED ON FOR THEM TO DO THE SAME, OR ONE DAY WE WILL SPEND OUR SUNSET YEARS TELLING OUR CHILDREN AND OUR CHILDREN'S CHILDREN WHAT IT WAS ONCE LIKE IN THE UNITED STATES WHERE MEN WERE FREE"..
PRESIDENT RONALD REAGAN 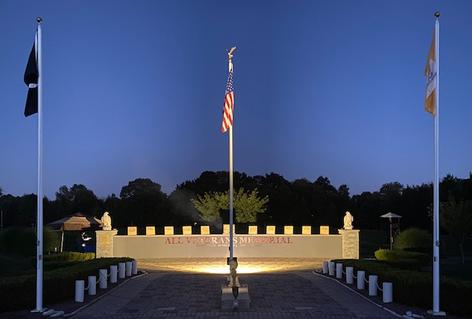 PENTAGON PLATFORM:  The AVM’s Pentagon Platform design resembles the U.S. Pentagon which is the headquarters for the United States Department of Defense located in Washington, DC.  The Pentagon Platform divided equally in five sections represents each branch of service: Army, Air Force, Navy, Marines and Coast Guard.  Each section consists of engraved pavers displaying the name, rank, and conflict of members who honorably served in the U.S. Armed Forces.   The overall scope or size of the AVM was determined by the total number of pavers sold during the initial promotion; more than 600 U.S. Army pavers were purchased in the first phase of the project. On-sight engraving within the Pentagon Platform area is available within the Navy, Marines, Air Force & Coast Guard sections only.

MT. OLIVE WAR MEMORIAL: sponsored by the Mt. Olive Historical Society ~  The monument, originally located at Budd Lake Beach was dedicated on July 4, 1968 by THE WAR MEMORIAL COMMITTEE which was founded by John C. Planker.  It is inscribed, "ERECTED IN GRATEFUL TRIBUTE TO THE MEN AND WOMEN OF MT. OLIVE TOWNSHIP WHO FAITHFUL SERVED IN THE ARMED FORCES OF OUR COUNTRY".  Thirty names of local fallen heroes are inscribed on the face of the monument.  By the year 2000 the once regal beacon had fallen in disrepair and forgotten. However, under the direction and close supervision of Mount Olive historians Thea Dunkle, Bill and Linda Sohl, the monument and its surroundings was restored to its original state and rededicated on
May 29, 2000.  It was relocated to the AVM on November 7, 2007 resting in the heart of the  Pentagon Platform where it is now adorned.  The War Monument is updated only on an as needed. basis.

MILITARY FLAGS: sponsored by the Father Joseph A. Cassidy Council #6100 Knights of Columbus

GLOBAL WAR ON TERROR (GWOT) MEMORIAL BRIDGE: see SPONSORS button below ~  pays tribute to all N.J. heroes who lost their lives while fighting the Global War on Terror.  FALLEN HERO  PAVERS ~ The 6" x 6" medallion pavers display the name, rank, branch of service and date of sacrifice of each fallen hero. Pavers are privately funded by patriots who believe that every fallen hero should be forever remembered and honored for their selfless service. The GWOT Memorial Bridge is updated the second week of May each year.  14 BOLLARDS: sponsored and built by Home Depot ~ The 14 bollards that delineate the perimeter of the bridge represents the 14th Amendment of  the United States Constitution; whereby declaring that "No state shall make or enforce any law which shall abridge the privileges or immunities of United States citizens; nor shall any state deprive any person of life, liberty, or property, without due process of law; nor deny to any person within its jurisdiction the equal protection of the laws.

PRESIDENTIAL PREAMBLE STAGE: see SPONSOR button below ~The educational Presidential Preamble Stage Area commemorates each U.S. President with a custom 24" x 24" paver  which is set in chronological order displaying the presidents': full name, the dates of their term in office, a famous quote that summarizes the essential role they played while serving and the name of the individual, family, organization, school or business that sponsored the President. The preamble stage serves as an educational opportunity for all to review the history of the nation’s highest leader. President Barack Obama’s paver remains available for sponsorship. The Presidential Preamble Stage is the result of a community effort that garnered more than 53 private donors. Click here to view..

CHARLES H. JOHNSON MEMORIAL GAZEBO sponsored by Linda & Bill Sohl and Thea Dunkle  ~ Just shy of seeing the completion of the AVM complex Charles "Charlie" H. Johnson, the  former Mayor of Mount Olive who proudly served as a Sergeant in the Air Force 9th Division during World War II passed away.  In lieu of flowers, Mayor Johnson's family and friends requested donations to go towards a gazebo that would memorialize his honorable service to country and community.  Sergeant Charles H. Johnson earned the Distinguished Flying Cross and Air Force Medal while serving hiscountry.  The Charles H. Johnson Veterans Gazebo was dedicated on May  26, 2008.